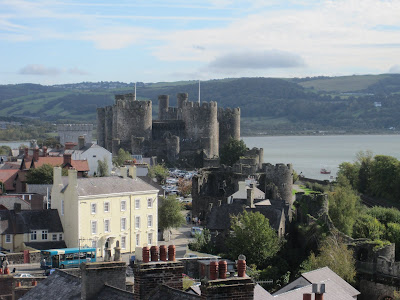 We don't often get a free day when neither of us has something on.The weather here is glorious at the moment,really sunny and hot.So it was off to Conway(on the North Wales coast).We decided to walk the walls and from there you get a great view of Conway castle.It was completed in 1287 by Edward 1 to keep out the Welsh .It was only in the mid 1400's that the Welsh were allowed to live in the town. 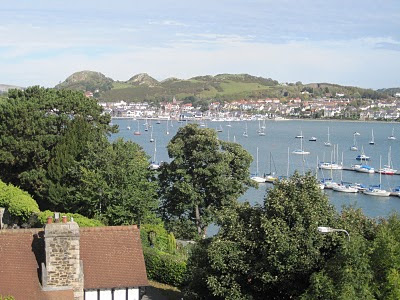 Another great view from the walls.After we had walked the walls we visited the Royal Cambrian Art gallery which had an interesting exhibition by five different artists.We always have to take in art gallery if there is the opportunity. 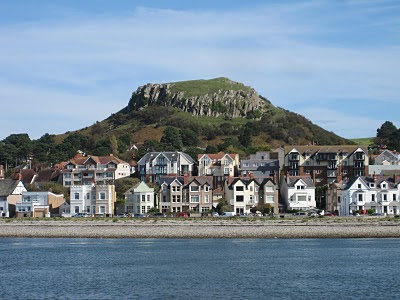 From there we got back in the car and went round to the Marina to have lunch at the Mulberry pub.It was here during the Second World War that hundreds of men were employed in building the Mulberry harbours.These giant piers were then towed across the English Channel and saved many lives by acting as a vital landing point for men and supplies during the D-Day landings.
From the end of the marina you can see across to Deganwy(above) and looking the other way the edge of Snowdonia. 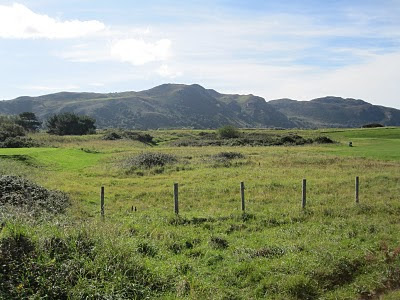 It was a lovely day out in glorious sunshine,such a bonus at this time 0f t the year. 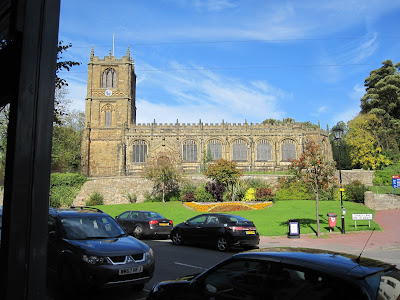 I took this photo this afternoon while I was waiting for a friend to join me in a tearoom/cafe im my town.Not a bad view from where I was sitting! 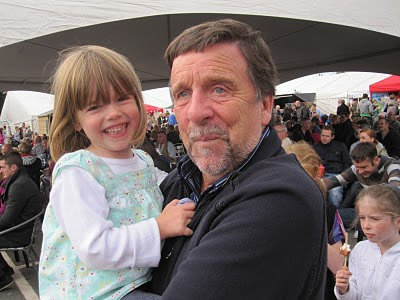 Back to the Food Fair for asecond time.This time with the family Ruby had the giggles with Grandpa.They were jiggling around to this group below.Their name "Peel Your Own Spuds"!!!Original. 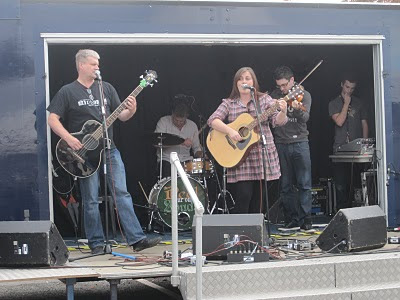 Emily having a go on the trampoline. 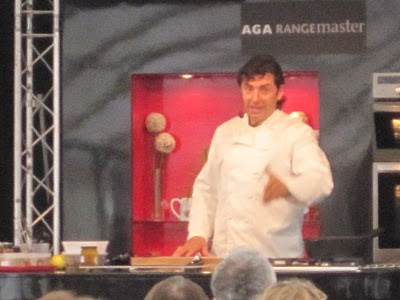 Here is Jean Christophe Novelli.We actually found it quite hard hearing what he said.His accent was very strong(but my hearing isn't the best). 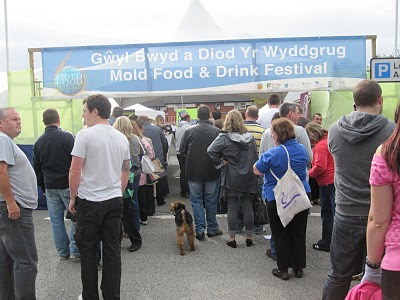 We live in the small market town of Mold in N Wales.Every year we have a Food Festival and it is this weekend.It is very popular.Lots of tasting-food and drink.Lots of food /drinks to buy. 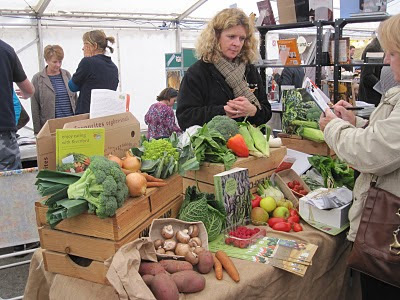 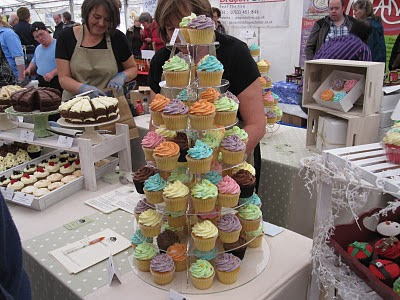 Just look at those cakes! 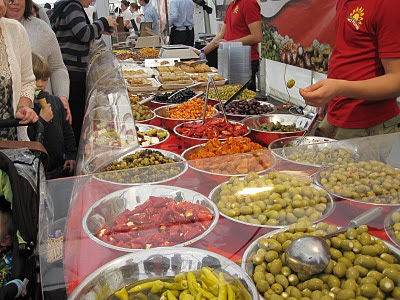 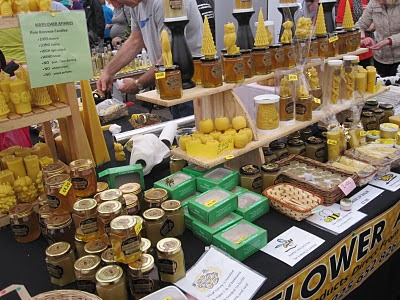 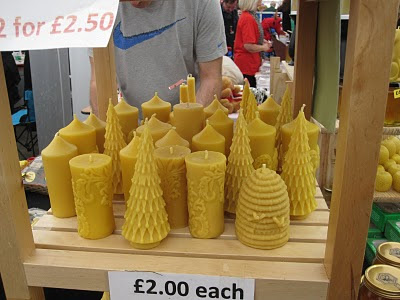 Just look at these. 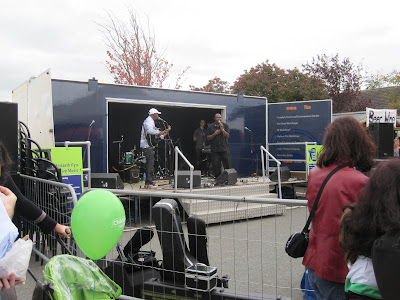 There was lots of live music to listen to while you had a coffee.
It was really difficult taking photos because it was so crowded.It's only £3.50 to go in.There were cookery demonstrations too.We are going again tomorrow because our daughter and family want to go.The chef tomorrow is Jean Christophe Novelli 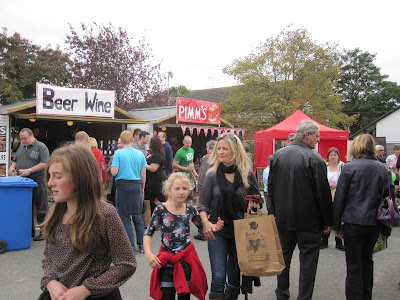 Posted by busybusybeejay at 06:39 3 comments: 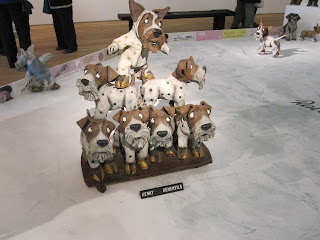 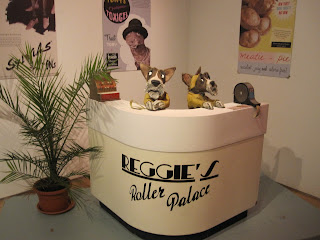 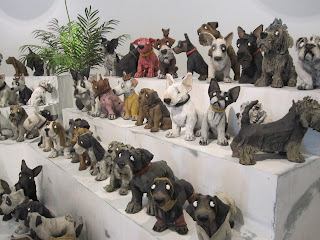 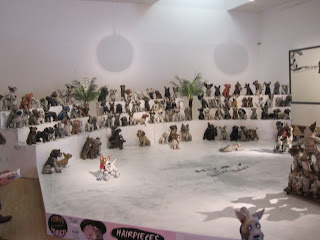 Today,in complete contrast we have been to Ruthin Craft Centre to see their latest exhibitions.One featured nine artists work using willow-baskets mainly but also some wall sculptures.All very nice and unusual.The other main exhibition was quite bizarre but made you smile.It was called "Reggie's Roller Palace".It is by Olivia Brown and to quote"a vintage take on the modern cult of celebrity alongside the branding and mass marketing that surrounds it,all seen through the eyes of Reggie(a rat) and over a 100 handmade canine spectators".
Olivia Brown is coming in October to give a gallery talk(free) which I may go to.On the same day there is Reggie's Celebrity Look -a-Like Pageant for Dogs!!Dress your dog as a well known idol and enter them in the competition to win an original ceramic dog.Dogs must be registered in advance and a photographer will do portraits.Well It's different!!!
Posted by busybusybeejay at 08:49 2 comments:

I have been following a blog by a remarkable young lady called Rosie Kilburn.I came across the blog in an article in the Guardian some while ago.Rosie was diagnosed with a rare form of liver cancer in 2008.She died yesterday aged just 19.She set up a charity called the Knock on Effect.She was promoting the message that cancer is not about suffering,it's about surviving.Unfortunately she didn't.She was a lively young woman with so many hopes and plans for the future.She did a "vlog" last Wednesday and although she was breathless it was lovely to hear her voice.She was blogging even on Saturday showing off her new duvet cover.She was full of humour and I for one will never forget her.Such a waste.

Something like this really makes you think.Sorry it is such a glum post.
Posted by busybusybeejay at 09:00 3 comments: 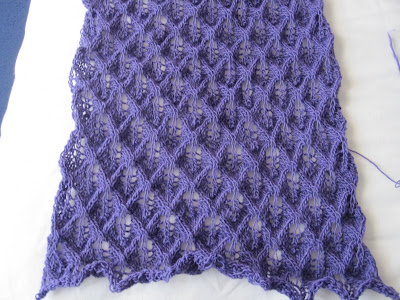 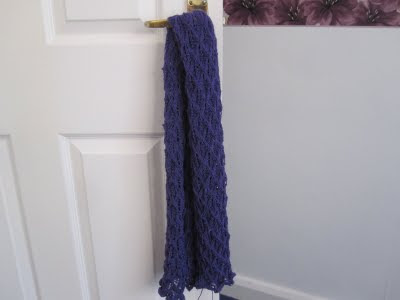 It obviously isn't finished because it needs blocking.Also,I am going to add a beaded fringe on each end.We are going to a party celebrating a special birthday of a close friend in November.I normally don't buy her a present,just send her a card(we don't live close to each other)so I thought this would make a suitable present and she will really appreciate something handmade.
Our house has never been so tidy.The estate agent comes tomorrow to take photographs and then the house,well bungalow,will go on the market.

Posted by busybusybeejay at 10:55 6 comments: 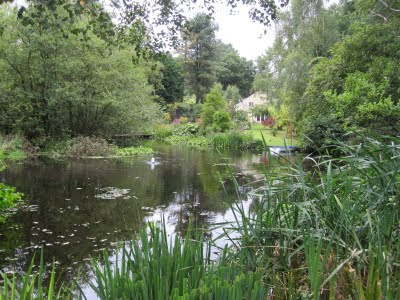 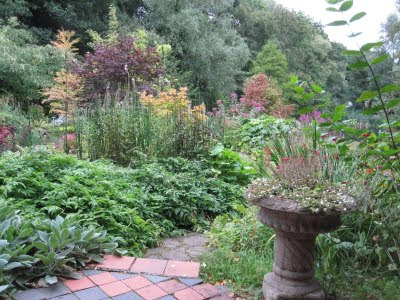 Posted by busybusybeejay at 11:16 7 comments: