I saw the orthopaedic consultant thos morning and the A&E doctor had misread my x ray.The plastic between the two metal bits of my new knee has broken.The metal markerin the plastic that shows whether it is in place has moved and is on the side of my leg above my knee.This means knee revision surgery which is more complicated than the original op and takes longer to recover.They say it is urgent but how long that will be I don't know.I am gutted.
Posted by busybusybeejay at 07:58 9 comments:

What a strange few weeks and a visit to A&E! 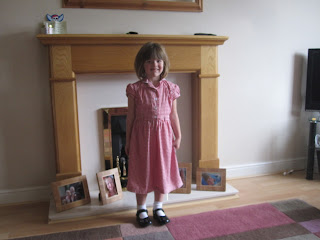 These last few weeks have been filled with having a new kitchen fitted and helping our daughter out with Emily and Ruby.Here is Ruby in her school uniform ready for school.She is the last of our grandchildren to go to school and it is quite sad because we won't get to see her during the week.We have been helping while Ruby was doing odd times and days until starting full time next Monday.She insisted on having her photo taken in front of the fireplace at her house!why?I have no idea.
While this has been happening we have had a new kitchen fitted which we are thrilled with .We have gone for ivory units and tiles and slate coloured worktops and floor.We are accessorising with red.I cannot believe the shades of red there are as we went between John Lewis,Next etc!! 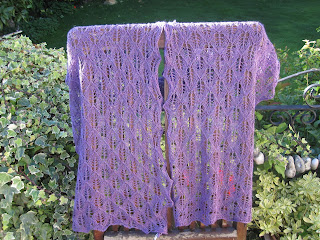 However,despite being busy with the above I have finished two projects.This scarf/stole is in Posh yarn 2ply,a mixture of merino and silk. 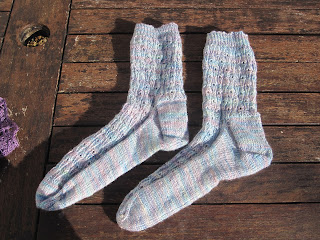 This again is Posh Yarn.The pattern Knitspot Summer Fun Sock.
Today has been eventful because I was in A& E at 9a.m.Four years ago I had a knee replacement and it has been brilliant-until Monday.I tried to get up from the sofa at Sarah's and my knee locked.I couldn't straighten my leg or put my foot down and was in excruciating pain.After half an hour it eased and I could walk again.It happened twice more during the evening.Yesterday evening I was putting my shoes on to go out and it happened again and lasted for two hours.I couldn't move or walk and the pain was awful.So this morning to A&E.Amazingly quick.I was seen by a doctor,X rayed,seen by t he doc again all in an hour.The X ray didn't show any damage to my artificial knee so I have to go to the fracture clinic tomorrow as a way into orthopaedic.Since the doc fiddled it hasn't locked again so here's hopong he's fixed itLife is never simple is it?This has really knocked my confidence.I am dreading driving or even going out and it happening again..
Anyone know what has happened to kathy from Postcards from the PP?
Posted by busybusybeejay at 11:19 2 comments: