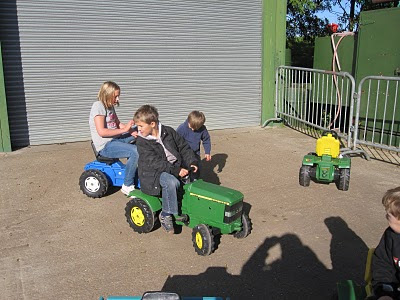 Four days in Cambridge looking after the grandchildren!We had to try and think of things to do that would interest a 4yr old ,a 7yr old and an 11 yr old.
Fun at the farm.We went pumkin carving.I have never done this before and it is really difficult.They also had lots of other activities.
Tractors. 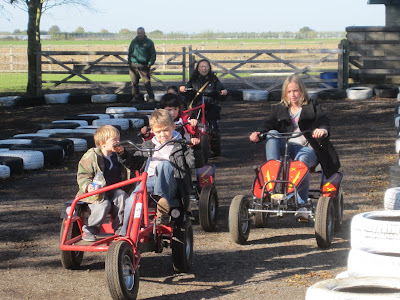 Go karts.They also had a "Shriek Shed".I thought I had better try this first and it really was quite scary.It was pitch black.I only got round by holding onto the coat of the lady in front of me.There were daggling things,noisy things etc.Only Ella and Grandpa went in.I thought it might give the boys nightmares!

Another day we went Ten Pin Bowling which they could all do.That was great fun.

We also went to Wicken Fen(NT).They have a boardwalk there which is about a mile all round.They had organised a "Who killed Mucky Mole" trail which was good.

We had the usual walk into Cambridge and Ella chose to go to Starbucks.Poor Fin had a rugby school day and it poured down all day. 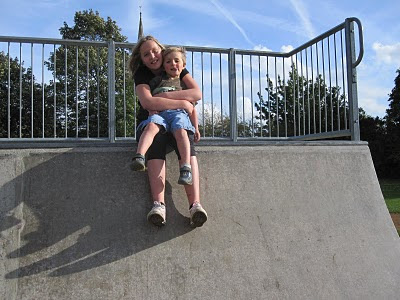 We had many visits to the park and games of football and played so many board games.I taught Ella how to crochet.very difficult as I am left handed and she is right handed.

We got back last night at 9pm absolutely shattered.The children had behaved well for us.(better than for their parents where they get away with murder!).We laid out the rules at the start-no fighting, no arguing etc.We had a lot of fun and really enjoyed it but it is the non stop all day which we are not used to.We are busy at home but at least can take a lunch hour.

We rest this weekend and then have Ruby and Emily all day Monday.We have never before done such a stint of child minding.Enjoyable but tiring.
Posted by busybusybeejay at 09:33 2 comments:

message for Allison and Sarah

Sarah -did you get my e mail address up date?If you didn't it's the same as before but not dsl.pipex.com but talktalk.net.Could you send it to Allison,please?

Allison-I can't seem to be able to send you an email.It's blocked.

I would love to do the Xmas box again.
Posted by busybusybeejay at 10:51 2 comments: 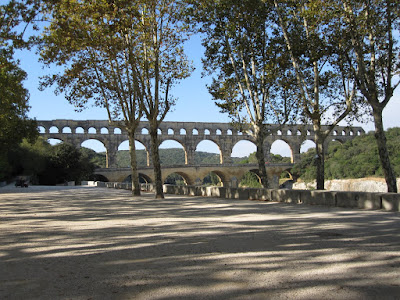 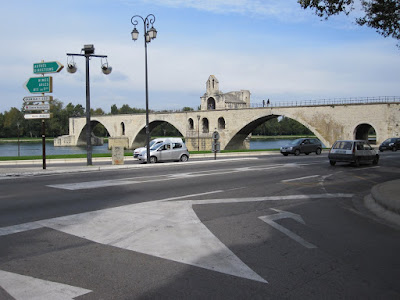 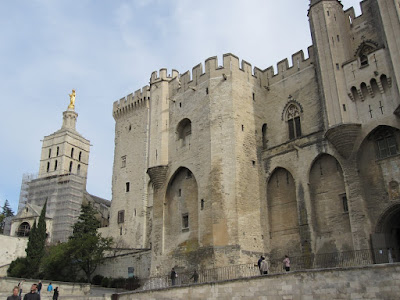 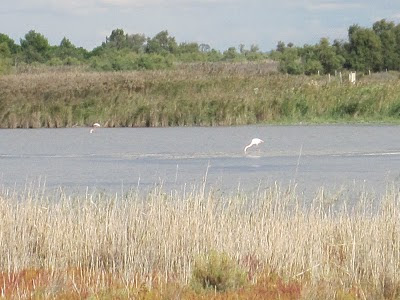 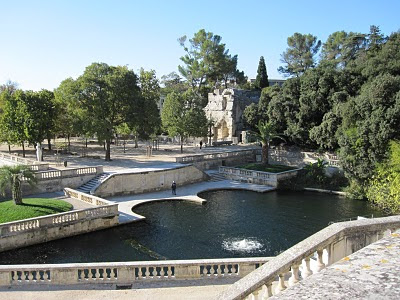 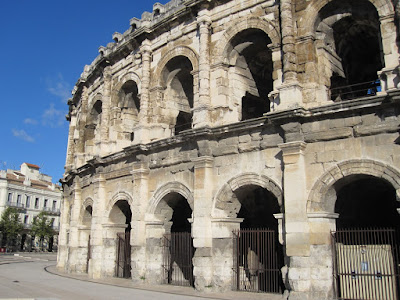 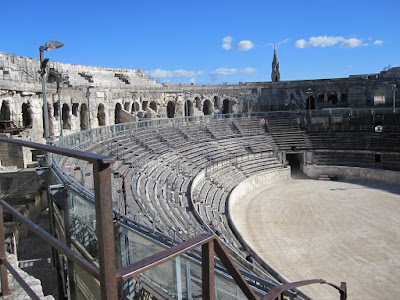 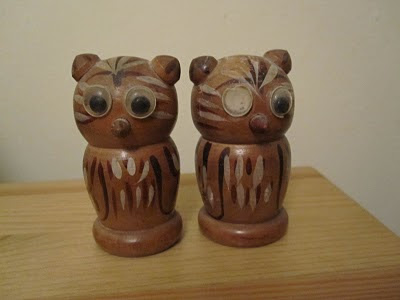 I told you I would show you my favourite owls.Here they are!Bet you didn't think they would look like this.When Sarah was about 6 my in laws took her and Matt to some church event to give us a bit of a break.We gave them some money to spend and S knowing my love of owls spotted this salt and pepper set.My MIL was mortified because one had an eye missing.I was so touched and have treasured them ever since 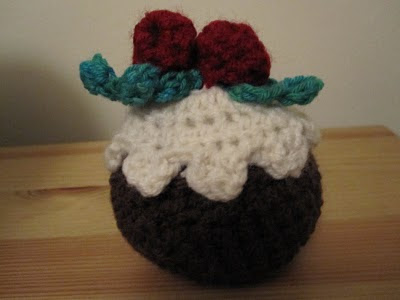 Yesterday in a garden centre S was looking for something to put on the top of a sweet jar for something at Emily's school.We spotted a Xmas pudding,crocheted, for £6.99.I told her not to buy it I would have a go at making one and this is one I made, making it up as I went along.It stands about 4 inches tall and I feel pretty pleased with it. 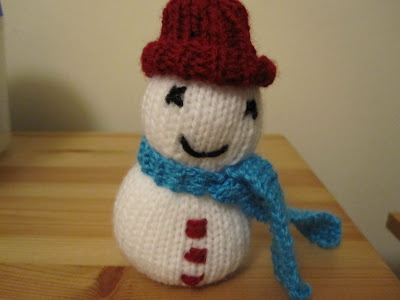 Bitten then by the Xmas bug I made this little snowman.
I did promise to show some more owls but the ones I wanted to photo are in the garden and it's gone dark.
I,finally, got signed off from the clinic today 5 weeks after my abscess op.On Friday we are off to Nimes for 5 days.Fingers crossed nothing goes wrong although we are aware the French are striking at the moment over the raising of the retirement age.We may get stuck in France!!

Posted by busybusybeejay at 11:22 2 comments: 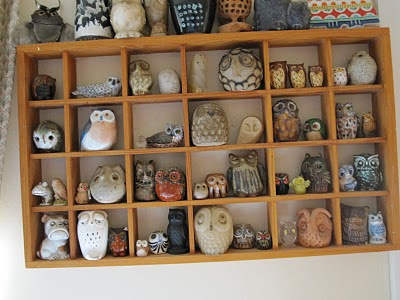 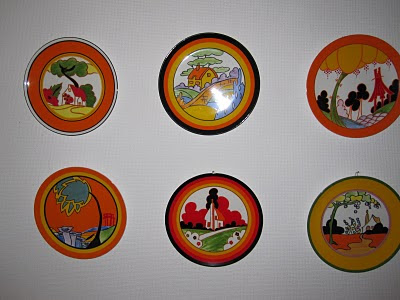 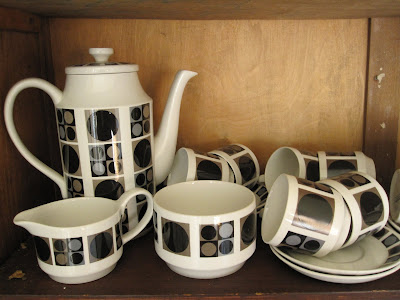 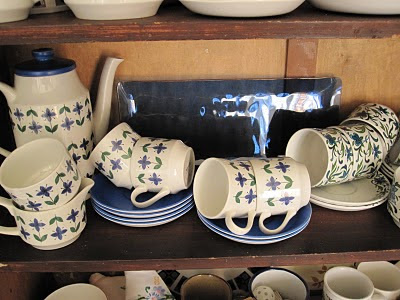 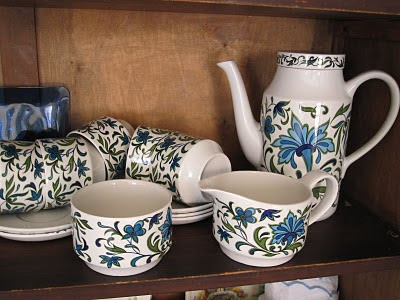 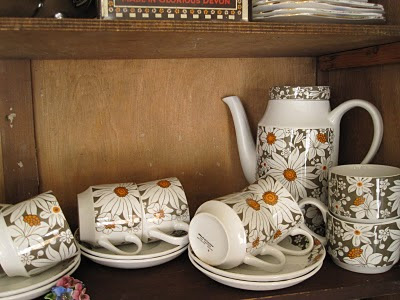 Posted by busybusybeejay at 11:05 4 comments: 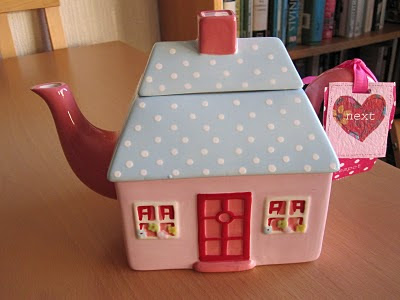 It is the birthday of one of my friends next week.She is really difficult to buy for.I usually spend ages looking for something but never seem to hit the spot.I would never give her anything i had knitted as she just wouldn't appreciate it.Anyway I spotted this teapot and decided to get it for her plus some fancy teas and a reading journal as she is in two reading groups.What would you think if someone bought you a teapot as a present?Have I got it hopelessly wrong?May have to rethink and keep it for myself!

Yesterday I had to play "mummy" for my daughter.She had to have a wisdom tooth out and is terrified of dentists.She doesn't like the injection.This is someone as an insulin dependent diabetic injects herself four times a day.She goes into total meltdown and has been known to hyperventilate.Actually yesterday she was OK.I just prattle on and try and distract her.She realises how silly it is afterwards and came out and said this is ridiculous.I have had two C sections and wasn't nervous of them at all.It's a funny old world(but the tooth was huge and had a hooked root).I was just glad I could help.
Posted by busybusybeejay at 09:14 4 comments: 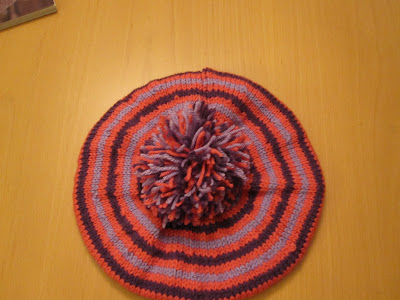 This is a beret I knitted last night for Ruby from scraps of wool I have stashed away. 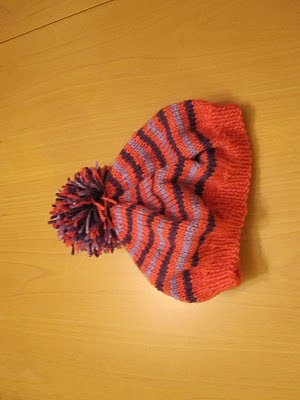 You can tell I feel the cold weather coming. 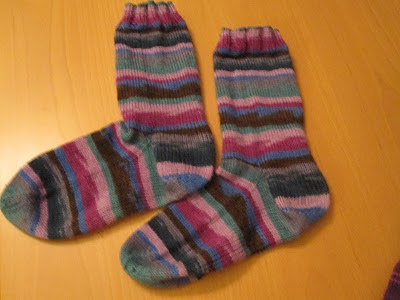 Socks for me.This Regia self striping wool is brilliant to knit with. 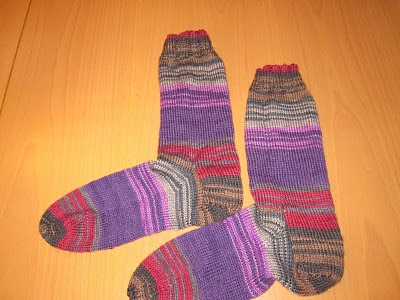 Socks for C.These are knitted in Lana Grossa merino.80% wool.20% polyamide.
I have now started some gloves.I have never knitted gloves before and I think they may be a bit fiddly.I couldn't resist Posh Yarn on Sunday and bought two lots.Some lace weight and some sock weight.
Someone asked me the other day what was the happiest period of my life so far.It certainly was n't school.I went to a very small primary school and was the only one to go to my grammar school.College was OK.I loved being a mum.Having lost our first baby the happiness Matt and then Sarah brought was amazing.There is only 13 months between them so it was hard work but I loved family life.I enjoyed teaching immensely( I didn't go back until the children were in school) until National Curriculum and the dreaded SATs came in.They were so ridiculous when they first arrived.I love being retired and now being free to do what I want when I want after all those years of juggling work and family.I love being a Grandma.I'm sure I will add more tomorrow.
So many things to be thankful for.
What has been your happiest time and what makes you happy?

Posted by busybusybeejay at 11:13 4 comments: 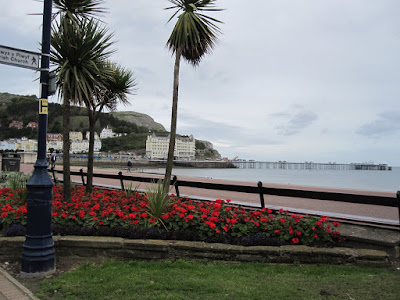 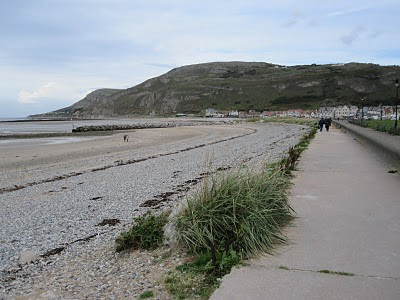 Posted by busybusybeejay at 05:18 7 comments: