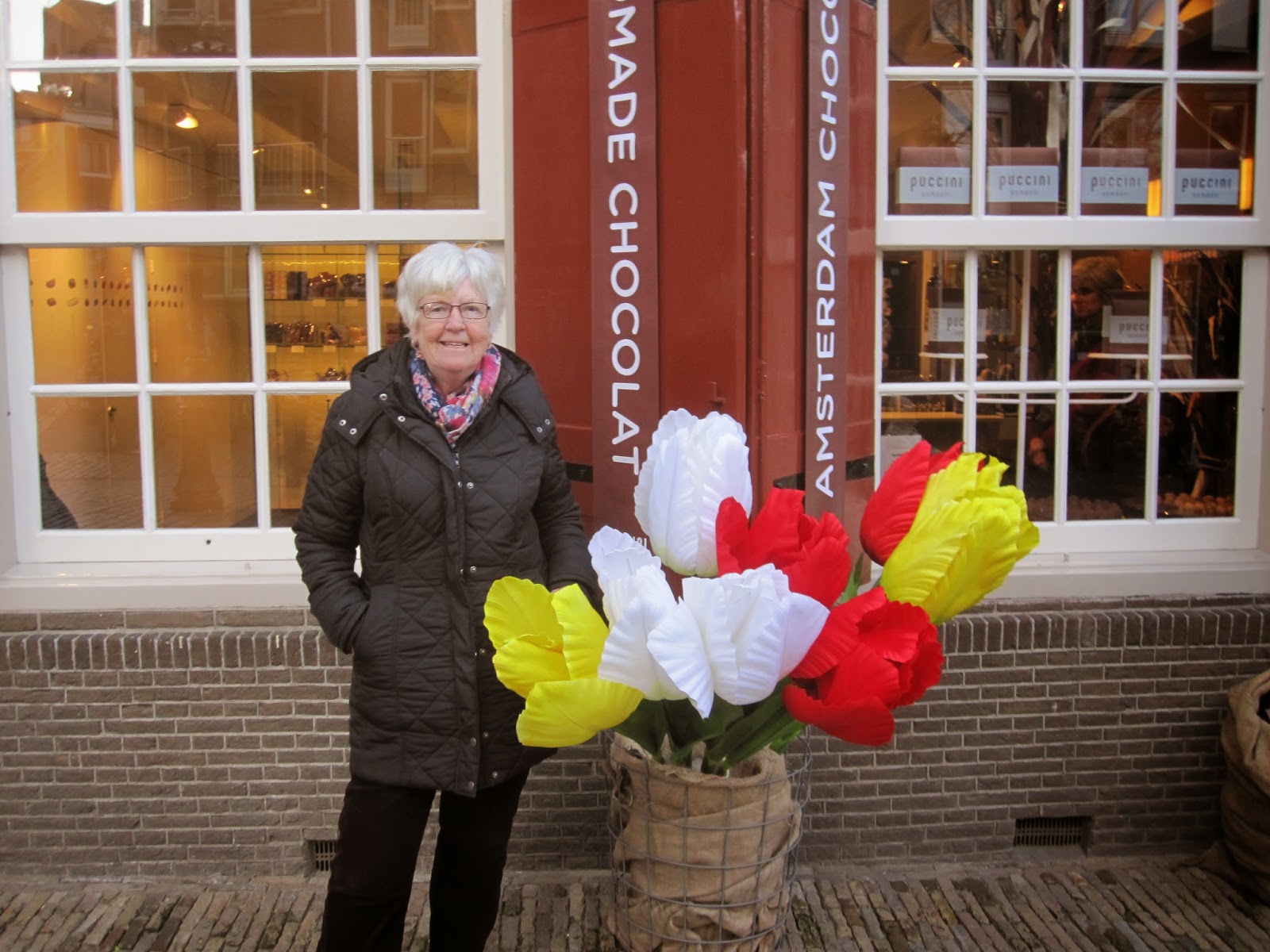 A week yesterday we went to Amsterdam in the Netherlands.We love art and one of the main reasons for going was to go to the Van Gogh Museum and the Rijks Museum to see great art.We were very well organised and booked our tickets ,on line, and in advance.Unfortunately our plans were scuppered because President Obama was in town ,en route to The Hague for a Nuclear Conference.He was visiting the museums on the day we had booked our tickets and all the museum area was closed!Much  panic followed but we did manage to go the following day.The van Gogh museum was interesting but a little disappointing as most of his famous  works are elsewhere(all his sunflower pictures are in London).We were more impressed with the Rijks Museum especially the Night Watch by Rembrandt.There were more works by him and also Vermeer.
We had a hotel just  off Dam Square which was very handy but in an expensive area.Two glasses of lager were 9 euros!
Above is a photo of me with the famous "tulips fromAmsterdam" 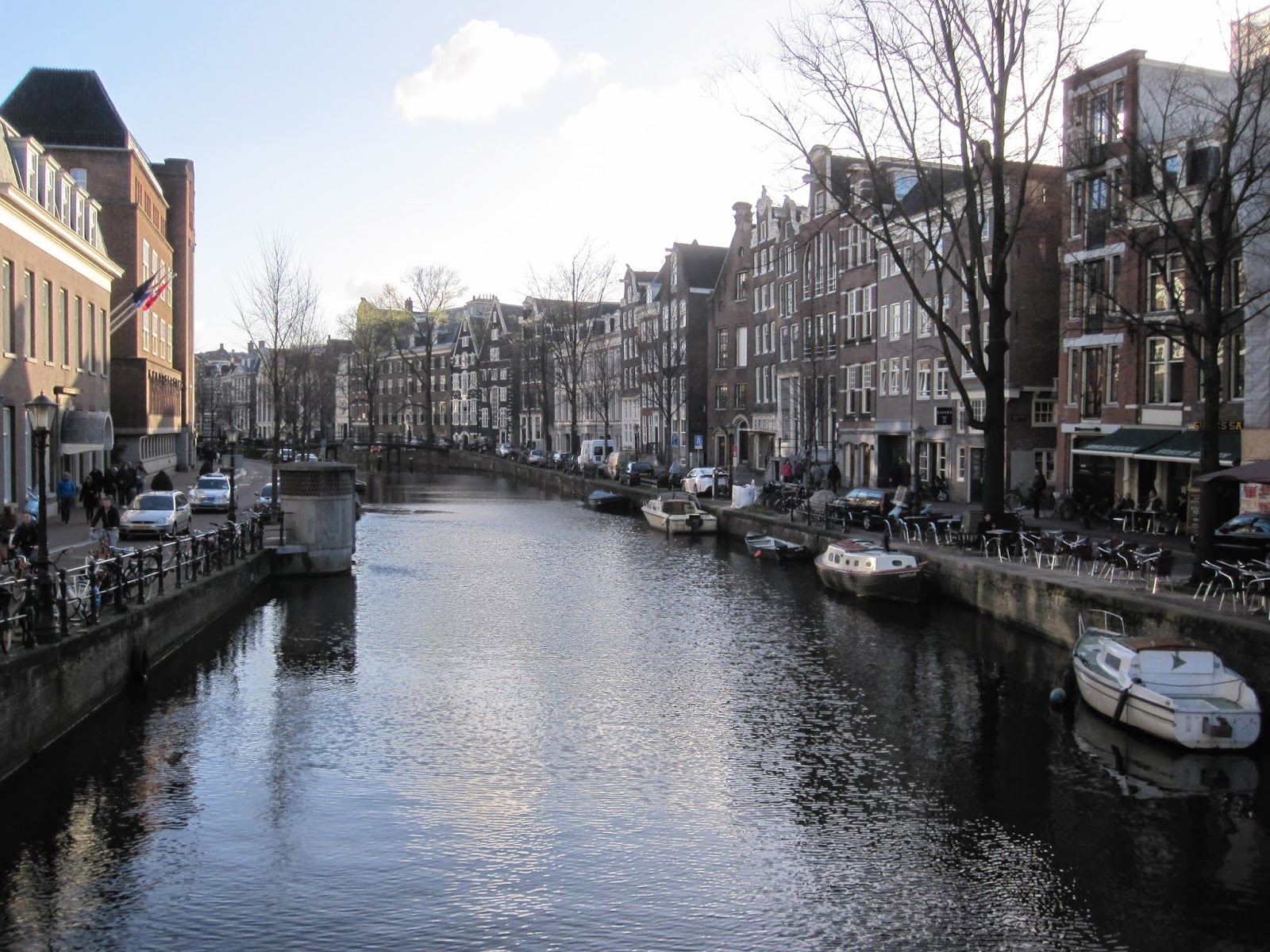 Looking the other way from the same bridge. 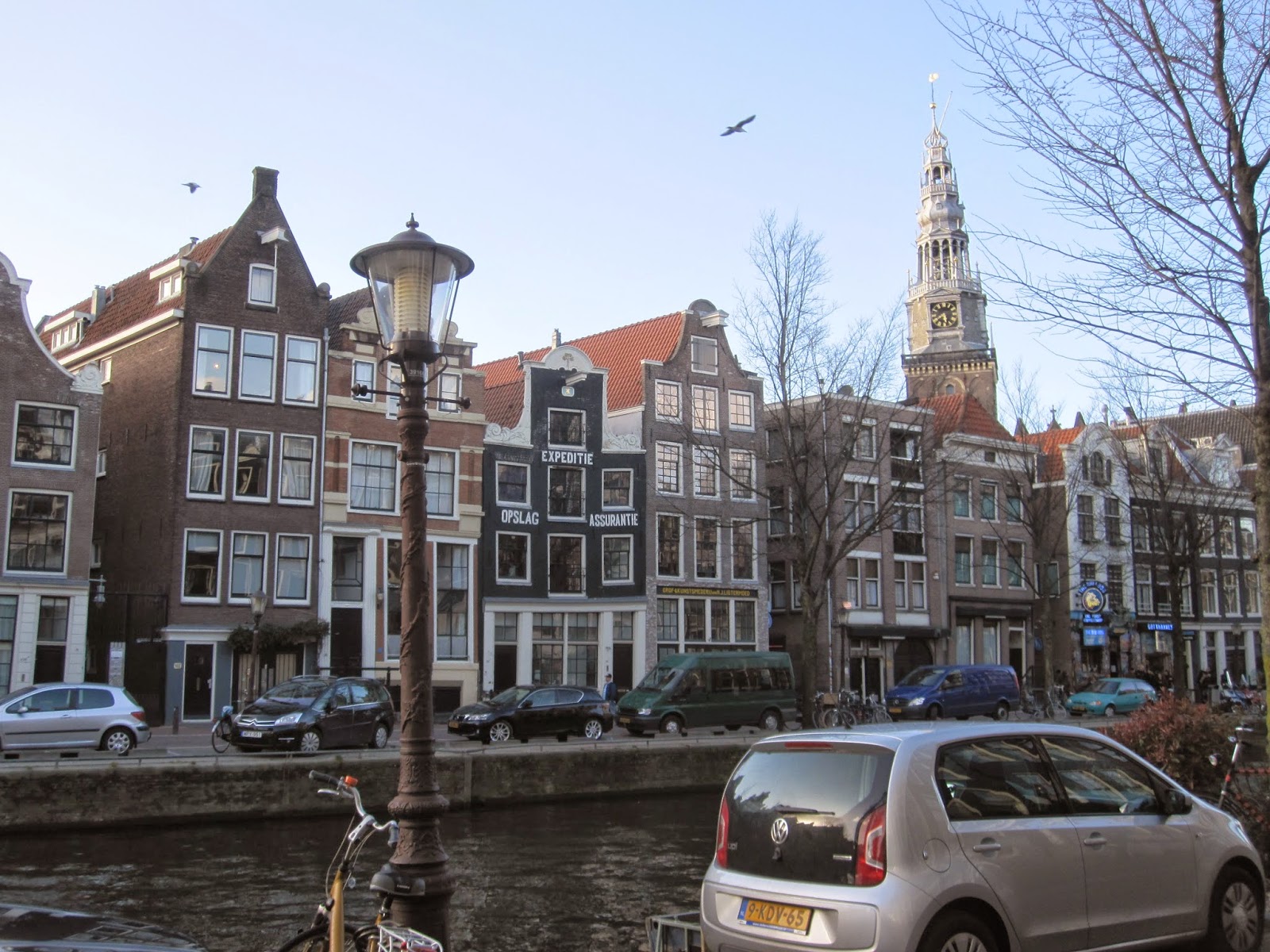 Typical houses and bikes everywhere.I tried to upload more photos but they disappeared.
While in Amsterdam we visited Anne Frank's house.This is a fascinating story and so humbling to read it and see where they hid.Anne died in Bergen Belsen just before the end of the war.Her father,Otto,survived and in 1947 found a publisher to print the diary.If you havn't read this you should.
We also visited Rembrand's house.This was so interesting.It is a three storey canal house built in 1606.He bought it in 1639 using money from his wife Saskia.The top floor is dedicated to his etchings and there was a man there demonstrating how it was done,also someone showing how he mixed his paint.You see his living quarters as well as his studio and get a real"feel" for Rembrandt.
It was a great trip.We walked miles and miles and my knees were great(thank you Mr Wooton for my replacements).We got back on Wednesday evening at 10pm and on Thursday at 11am we were off to Cambridge but that is a story for another day.............
Posted by busybusybeejay at 12:55 9 comments:

It's March 1st today-St Davids Day.So Happy St David's Day from North Wales.Lots of daffodils in evidence around town today,Welsh cakes being given out,choirs singing etc
.Last night we went to Theatr Clwyd to see Under Milk Wood by Dylan Thomas.It was a Terry Hands production so we knew it would be good.It was originally written for the radio and as such is quite difficult to transfer to the stage.Terry Hands did a great job.How do these actors remember such long speeches?It amazes me .The Guardian gave it 5 stars.It was good to see the main theatre full.It holds 550 people and we are only a town of 10,000 population.Under Milk Wood is on for three weeks and has been a sell out most nights.We are so lucky to have this theatre five minutes from our house.
Posted by busybusybeejay at 07:31 5 comments: