Does anyone know what plant this is?

The shrub is about one metere tall and wide with lots of these tiny yellow flowers.I can't find it in any of my books.I live in North Wales .uk.
Any suggestions ?
Posted by busybusybeejay at 10:25 4 comments:

We have been to Northumberland.

We stayed in a Studio flat attached to a pub in Boulmer,Northumberland.It is east of Alnwick on the coast.These are fishermen's cottages by the inn.

This is the view from our window.

It is a wild and rugged coast and very beautiful.We were there for three nights but packed a lot in.Below is Bamburgh CastleWe went round this at the end of the day and it was hard work,steep and lots of stairs and slopes.Next was Lindisfarne Castle on Holy Island.

Blogger will not let me scroll down so Here is where else we went
Cragside(NT)This was the first house in the world to be lit by hydroelectricity.Wow.It was a pretty impressive.It was also an Arts and Crafts masterpiece with stained glass by Rosetti and tiles etc by William Morris.
We also visited Wallington(NT),again very impressive.
C wanted to visit Hadrian's Wall which we did on the way stopping at Housesteads Roman fort.
While we were in Alnwick we visited Barters Books ,a second hand book store with 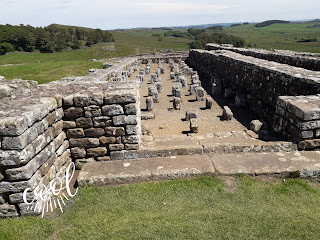 Posted by busybusybeejay at 12:31 5 comments:

One of our close friends was taken into hospital following a stroke.He had already shown signs of dementia and this won't have helped.This friend has had such an interesting life,RAF,worked in Paris for five years,back to the UK and then to Basel for two years etc.It is so sad to see him declining.He is now home and we shall visit tomorrow.
On Friday we went to a funeral,a woodland burial.Kate had only been ill for three weeks but was diagnosed with an acute form of leukaemia and she went down hill rapidly.She was only 73.The woodland burial was quite strange.Obviously in a wood but nowhere to sit and no shelter.Thank goodness the rain held off.Also at the funeral was a friend whose wife has got severe dementia at the age of seventy.Which is the worse situation?Brian whose wife has died or Arthur whose wife has dementia.What do you think?

Now onto brighter topics.On Thursday we went to Manchester to meet our granddaughter Ella who is just about to finish her first year at Uni.She wanted to show us the Northern Quarter full of little shops,bars,coffee shops and vintage clothing which she is into.We had a leisurely coffee,had a wander and then a lovely lunch.We are loving having her less than an hour away.
In my OH's family there was always the joke that he had Italian ancestors but no one ever believed him.On Friday I decided to subscribe to Ancestry.co.uk and dig deeper into my family history.Yesterday we started looking into his and blow me,he is right.We traced his family tree back to the mid 1800s and there is the Italian He came from Lucca in Tuscany and was a modeller in clay.We have also found some mention of him in industrial journals.He would make ornamental things to go in or on buildings.C was over the moon to prove he is part(a small part) Italian but who would want to leave Tuscany and come to Manchester?
A final note ,my S in law who is very security minded and computer savvy had a call from"BT" who managed to get enough details to take £15,000 out of his business account.Fortunately the bank didn't pay as it was the weekend .Beware!!!!
Posted by busybusybeejay at 07:28 10 comments: