There is snow on Snowdon(North Wales) 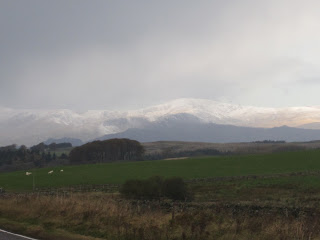 I love this time of the year.A friend and I were discussing the other day whether we could live somewhere that didn't have seasons.The conclusion was that we couldn't.The Autumn colours this year have been exceptionally beautiful.What do you think?

Yesterday saw a clear blue sky so although we knew the day would be going off we headed towards Snowdonia and couldn't believe that there was snow on Mount Snowdon but also on other lower hills.I am sure this is very early for snow.As we drove through Betwys y Coed it started sleeting.It only takes us 50 minutes to get to see this wonderful scenery.From Betwys we went down to the coast at Conway,had a quick drink in Llandudno and headed for home.All done in three hours.

An update on my knee situation.I actually saw my consultant on Thursday and it isn't as bad as we feared.He was quite mystified because on the X ray everything looks normal so he is replacing the plastic bearing with a larger one and hopes that does the trick.He has to order the part making me sound like a car!The op should be done in 2-4 weeks and then hopefully we won't have to go everywhere with crutches and a wheelchair in the car.(In case the knee locks)

An update on our murdered vet.The police have found the remains of TWO bodies but have not actually said if either is the missing vet.