Worries about our daughter and my new car. 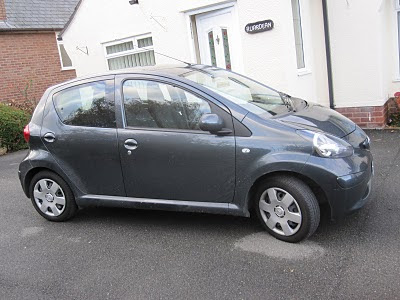 This my new car.Well,it isn't new.It's a 57 reg but it has only done 15,000 miles.Previously I had a C3 but it was 7 years old and we knew we would have to spend on it for the MOT.It really is an indulgence running two cars now we are retired but C and I have different interests and are often going in opposite directions.So we opted for this Toyota Aygo.£20 road tax and very economical.The trouble is I am not sure I like it!It sounds like sewing machine on wheels.I daren't admit to C I am not too sure.I will get used to it but I did love my C3.

On a more serious note.We are very worried about our daughter.She is a Type 1 diabetic and has been since she was three.She is now 38.A few weeks ago she changed hospitals and consultant.The new one made some comment to s that she would only live to 50.He has since withdrawn this and says she miscostrued what he was saying.This may be true but it is in Sarah's head.He also sent her to ,what she calls,a "fat" clinic.Not a good idea for low self esteem anyway.Plus as well her usual injections of insulin he gave her tablets which have made her nauseous.He insists she stays on them.She has two little girls and it is hard.We think she is sinking into depression.I am going over to see her tomorrow and hope we can have a good chat and stop her getting worse.Em will be in school and C will take Ru out.She has an appointment with her GP on Weds and hopefully she will let C go with her.
Posted by busybusybeejay at 08:20